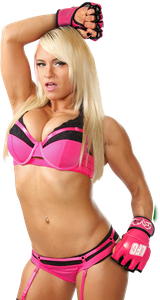 
Lauren is a blonde brawler who captivates fans with her flashy entrances and battle cries. She is a two-sport lingerie athlete who played for the lingerie football league in addition to fighting for the LFC. Lauren, a current member of the Pink Team, is known for her stunning looks and bullying style of fighting. Her moniker of ‘The Animal’ is fitting because at times it seems that she is going to transform into something terrifying right in front of your eyes. She is always intense in the cage, and she has an all-or-nothing fighting style that keeps the fans glued to the screen. Lauren has pivoted from being ruthless in the cage to being calculating, biding her time to get the submission. She is a serious threat against any competition, always waiting for an opportunity to devour her next prey.