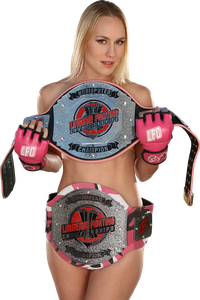 As a mainstay of the LFC, Hexx grew up fighting her 14 brothers in a polygamist sect outside of Salt Lake City, Utah. This is where the “face of the LFC” found her calling for battle. Leaving her roots behind, she went on a spiritual retreat to Israel, where she was introduced to Krav Maga. Shortly after, she began her career in executive protection. While on a mission to Uganda, she stumbled into MMA and compiled a 14-4 record fighting in the underground circuit. As the first ever European Champion, Jolene brings a full arsenal of fighting disciplines into the cage. She is highly regarded as the best trash-talker in the LFC. ‘The Valkyrie’ relishes in getting under an opponent’s skin with quick verbal jabs that are delivered with perfect timing and a sadistic smile. She is a natural, destructive force, and is also well at home in front of the camera, consistently adding more credits to her film career.