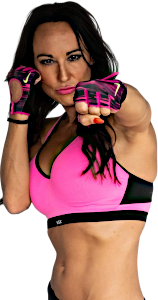 Suzy made a name for herself as a top athlete in the fitness industry who is a 3 time NPC Champion in the Elite Women’s Figure Division. Wanting to branch out into the sports entertainment world, she then made the move to Atlanta to pursue a professional wrestling career. She trained intensely with other developmental wrestling athletes from both WWA4, Deep South Wrestling, and Georgia Championship Wrestling, eventually capturing the GCW Women’s Championship Title. Quinn has extensive training in Gymnastics, Taekwondo, Kickboxing, and Muay Thai. Her signature move is the high-powered Stiletto-K.O., a secret weapon used to take down and annihilate any opponent who dares to step into the cage with her. Suzy has an affable personality that is warm and inviting, but she is a beast once the bell sounds. LFC fans are looking forward to seeing what this newcomer can do against the ladies of lingerie.