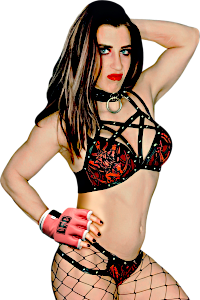 A native of Philadelphia, Vita VonStarr began her performing career as a burlesque dancer on the midway. Knowing she was so much more than a pretty face, and not wanting to be relegated to a sideshow act, she soon took to the sky as an aerial acrobat. Audiences oohed and aahed every night at the daring and athletic spectacle before their eyes. Vita’s time flying through the air gave her the strength and the enviable body control that she is known for today. Little did she know that this training would prepare her for a future in pro wrestling. Stumbling across a wrestling show while on tour with the big top, she instantly fell in love with this art. Vita knew that her place was in the ring, flying off the top rope and slamming her opponents with the greatest of ease. Her debut at LFC31: Booty Camp 2 showed a fighter in complete control of every muscle in her body. Vita is an undeniable star who understands the value of entertaining the fans while dispatching of her competition in the process.