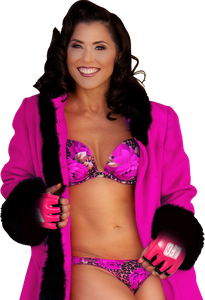 Tomiko, a native of Las Vegas, Nevada, is fashionably known as 3T. Her body is extremely fit, giving her a solid foundation with which to compete in the LFC. Tomiko’s athletic physique makes enough of a statement, but she is even stronger than she appears. Tomiko’s training is in wrestling; however, she is not without the willingness to learn other disciplines to round out her fight game. ‘The Temptress’ is no longer new on the scene and she has proved that she belongs on the big stage. In spite of her losing record, Tomiko’s fights have all gone the distance, and she has shown the fans that she is a serious threat to get the win on any given night. This member of the Pink Team always comes to fight, displaying her courage for all to see.