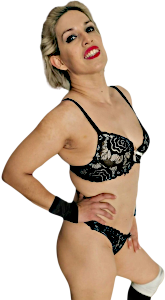 Unlike other Mexican fighters who train as wrestlers, Jade took it a step further and learned Muay Thai, preparing herself for any kind of combat. This fighter, with a deceptively friendly smile, hails from the northern part of Mexico: Monterrey, Nuevo Leon. As the owner of her own wrestling company, she has a keen understanding of the game inside and out.