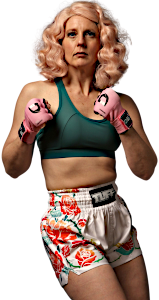 Frankie has been fighting injustices in the mean streets of Omaha, Nebraska, for a long time. She began defending herself at an early age against the boys who would beat her up on the way home from kindergarten. In recent years, she has started bodybuilding and aerial arts, using her acrobatic athleticism from her aerial practice to stay light on her feet. Frankie looks to make a splash in LFC and gain a fan following in the process.