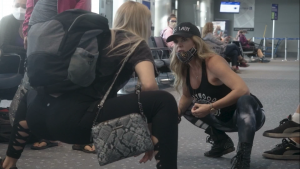 Every new season of ‘Exposed’ is a reset to the LFC conversation, bringing the excitement of a recent event – LFC30: Born To Be Wild – while positioning itself for the future. The journey to Sturgis begins with an airplane ride for most of the fighters, who are reacquainted with each other during a layover.

Considering that the restraints of the pandemic are in effect, the women are surprisingly at ease with one another, and the usual drama does not materialize. Concerns over Bella Ink, who just three weeks prior, gave birth by a c-section, is voiced by Holly Mei [0-0] and Leon Hater. With the safety of Ink assured, the fight card is set.

We now get a glimpse of three roommate pairings. Two newcomers, Nilka Garcia and Danika Della Rouge find that they have more in common than just their Puerto Rican ancestry. Another pairing are Jolene Hexx and her good friend Tomiko Tajima. Jolene, showing Tomiko what friendship means to her, allows “The Temptress’ to wear her European championship belt. Later on, Jolene gives Tomiko a valuable lesson in Krav Maga, finishing the session with an indiscreet kick to Tomiko’s privates. Another set of friends, Jenny Valentine and Suzy Quinn, find themselves sharing a space. Suzy, who rode to Sturgis on her motorcycle, is curious about wardrobe malfunctions. Jenny offers the LFC rookie advice and a pair of pasties. 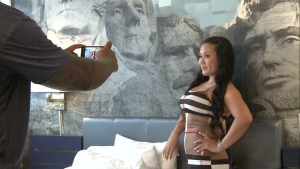 What would the LFC be without drama? I am not certain, but it would surely seem fake and contrived. The drama begins when Leon Hater is informed by Holly Mei that Jenn Repp – who is scheduled to fight Teri London – is unable to make the trip from Canada because of Covid-19 restrictions. The referee for the card, who was flying with Jenn, is also unable to make it. Not wasting a moment fretting about the situation, Holly makes the quick decision to use Teri as the referee for all six fights. Leon, of course, is not happy about a fighter he does not coach being the referee.

An unassuming owner of a dune buggy allows a quartet of girls to pose on his machine. Let’s just say that Lauren Fogle, Teri London, Shay Mazzato, and Monica Garcia come very close to submitting the dune buggy, while they pose erotically on top of it. The women are all rooming together near the venue, wanting to experience the vibe of Sturgis. Yes! Mazzato and Garcia set aside their antipathy for each other and try to get along.

Suddenly, the screen starts to fill up with all the ladies who are scheduled to fight. Watch as they take ownership of the area, showing those around what the LFC is all about. This display of playfulness includes a ride on the back of a motorcycle that is outfitted with a small stage and a strippers pole. Who is brave enough to take a treacherous ride through Sturgis? Tune in to find out. 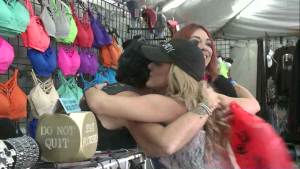 Female bonding is often made easier when it involves shopping for clothes, and that is just what Teri London [0-0] and Brooke Gilley [0-0] do during the opening scene of the latest episode. Kudos to the clothing store that set up shop at a bike rally and made it seem business as usual for event-goers. Teri, who is the referee for the card due to her match with Jenn Repp [0-0] being cancelled, advises Brooke on how to guard against any wardrobe malfunctions in her LFC debut against Suzy Quinn [0-0].

Jonny Tumbleweed, filling in as ring announcer, leaves his unique imprint on the LFC. With Teri overseeing the action, Brooke and Suzy open the show with the hope of something great from two new competitors. The first round is back-and-forth, with both fighters vying for the edge. In the second round, the physically bigger Brooke decides to exert some pressure and uses her trademark move – the guillotine – to dispatch Quinn, leaving her foe defeated and bleeding from the nose. 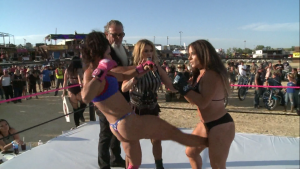 The focus of this episode is to show the competitive nature of two women who appear to get a ‘kick’ out of fighting each other. Tomiko Tajima is out to get revenge for her decision loss to Jenny Valentine at LFC27: Sexy, Nerdy, Inked & Curvy. The revenge begins during the introductions, when Tomiko kicks Jenny in the privates, repaying Jenny for the same violation during their previous meeting. First-time referee, Teri London, fails to deduct a point and is later on criticized for it.

Fans get to see the first two rounds of this fight, witnessing the back and forth between two women on a mission. The powerful Valentine does not hold back any of her power game, working hard to make her opponent suffer. Tomiko, to her credit, does not back down and is making the scoring very close. A wardrobe malfunction for the always careful Jenny pauses the fight. Fellow fighters are quick to criticize Jenny for past comments about outfit malfunctions. Round three is set to begin as the show closes. A tiring Valentine will make the next episode and the conclusion to the fight a very interesting one to watch. Don’t miss out! 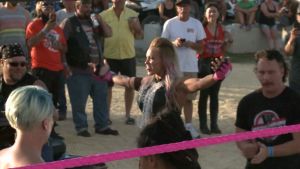 The final round of Tomiko Tajima battling against Jenny Valentine is full of excitement. The fight is squared up, and the dominant fighter is running out of gas. With exhaustion dictating the pace, the fighters take the action to the mat. Valentine, fairly or unfairly, works on Tomiko’s injured knee, trying to secure a submission that a proud fighter will not give. Did the judges get it right?

A pause in the action allows the LFC to introduce ten fighters from the booty camp. Which ones will make it to the big show?

Lauren Fogle and Bella Ink answer the bell for the next fight. Major props go to Bella for taking a fight after the birth of her first child. Lauren also gets some credit and respect for not attacking Ink where she was most vulnerable — her midsection. Winning and losing is the name of the game, and Lauren is intent on getting the upper hand. A rear-naked choke with a bit of flair secures the win for Fogle. 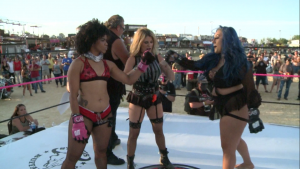 This episode begins with the no-nonsense Nilka Garcia [0-0] giving everyone the middle finger as she enters the ring. Her opponent, Monica Garcia [0-0], is not taking the newcomer lightly and is prepared to do whatever is necessary to get the win. The Prez, Holly Mei [0-0], compares the vibe that Nilka gives off to that of the former LFC champion, Andreea Vladoi [0-0]. Will such praise bode well for Nilka?

Round one shows the energy that Nilka brings to the LFC, but she is met with the size advantage that Monica usually enjoys. Nilka tries to carve out a plan of attack but is unable to sustain much. Monica, aggressive and unrelenting, holds her ground. Round one was very tight.

Round 2 brings out the wildness that sometimes creeps into an LFC fight. Both women launch illegal punches to the face, tempting officials to deduct points. However, the fight is allowed to continue without any consequences. Monica continues to use her weight advantage to frustrate and tired Nilka. Monica is starting to take control of the match.

Before the final round begins, Monica is offered a drink of whiskey, and she enthusiastically takes a gulp. The action once again gets dangerous with punches to the face. Nilka – who has never submitted – fights bravely and is seriously tested in the final minute of the fight. Does she succumb to an armbar? Tune in next time for all the details, including the harsh criticism Monica receives from her fellow fighters for alleged dirty tactics. 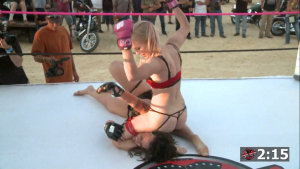 Allie Parks [0-0] takes on Jolene Hexx [0-0] in the co-main event of the Sturgis card in this big name affair between two of the best in the LFC. Parks comes out of retirement for the opportunity to fight at the world-famous bike rally, but she is forced to switch to the black team for the chance to do so. A feisty Parks comes out on the offensive, going after her former teammate with some solid knee strikes, but she inexplicably celebrates too soon -giving her back to Jolene. The Valkyrie responds accordingly and takes her opponent down. Parks recovers and makes an effort, but Jolene is there to deny her.

Round two is not the kindest to Allie or to her fans. It does not take long for the Booty Camp Champion to get trapped in Jolene’s inverted-triangle-choke. The submission hold came with a little extra twerking. Jolene was happily grinding on Allie’s face, embarrassing the proud fighter back into retirement, leaving her no choice but to tap. Watch as the fighters and coaches of the LFC discuss Jolene’s shocking finisher, and watch as Allie takes out her frustrations on her way out of the ring. Hopefully, this is not the last we see of Allie. 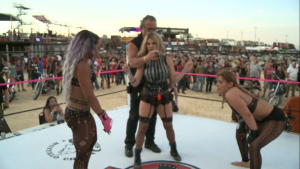 In this episode, fans get their first look at Danika Della Rouge [0-0], as she takes on Shay Mazzato [0-0] for the vacant LFC title. Danika brings an aggressive, nonstop style of fighting that wears people out. Equally, full of energy and aggression, is Mazzato, the former champion. The first round sets the tone — both women seemingly meld into one fighter. They are inseparable, forcing the viewers and the judges to follow along closely.

Round 2 is a wild back-and-forth effort that takes the action onto the judges table, testing the load-limit of the table. Teri London [0-0], the referee, is tested herself, having to keep up with the frenetic pace set by the fighters. This round finally brings out the newfound dislike between these two. With so much on the line, there is definitely an all-or-nothing vibe taking shape.

The third round is fittingly controversial to end the card. Did London miss the call when Danika screams during an obvious submission hold? Listen in on the insightful commentary from the coaches and the fighters. In the end, closing out the first-ever Sturgis show, Danika’s name is called and her arm is raised. Did this new champion win it cleanly, or was ‘The Fox’ wronged by the decision? Tune in to season 9 finale to find out.