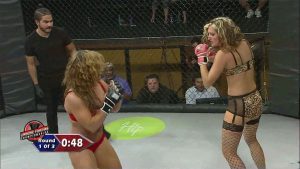 The LFC takes the show abroad to Bratislava, the capital of Croatia. For one fighter, Andreea Vladoi, this trip to European soil is a homecoming for the former Olympian. The teams suffer a few losses due to passport issues and personal matters. Not surprisingly, most everyone has a grasp of what it takes to travel well, except the coaches. Joel Kane is on a mission to find a sausage factory and drags Jolene Hexx into his unusual adventure. Leon Hater has tasked himself with the job of keeping both teams safe from his anxious imagination. Will they share his concerns for safety?

The Vienna House Hotel offers us an English-speaking staff, making our stay a comfortable experience. Nonetheless, LFC drama has no geographical boundaries. Andreea has issues with a messy roommate, MaiNe Morgan. Cali Cat and Lauren Fogle come as close as two people can to exchanging blows on an elevator. Luckily, the door opens and Allie Parks squashes it with her presence. Later, a fearless Lauren has a brief but violent encounter with two construction workers. 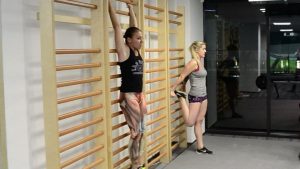 In this episode, a visit to the Olympic training center has Andreea Vladoi looking happier than we have ever seen her. The teams enjoy a state of the art facility that allows them to indulge in the restaurants and the spas housed there. Joel Kane, with a stern shove from Roxy Michaels, ends up tasting chlorine yet again. This time he can boast it was at least an Olympic sized pool.

Matched up at LFC24, MaiNe Morgan and Allie Parks, put the inevitable confrontation aside, and joined by Teri London, go on a sightseeing tour of Bratislava. The trio makes a stop along the Danube River and curiously explore as much of the host city as possible. Allie realizes that they can separate business and pleasure.

Jenny Valentine, back from her lifetime suspension from the LFC, joins Allie and Teri, as the three make a promotional stop on a local radio show. The women describe the league: it is MMA with a twist – sexy lingerie. Piper Rose teams up with her opponent, Maxine Frost, on another radio program. Piper finds Maxine’s persona intimidating, but the two professionals do a great job of driving interest to the show. 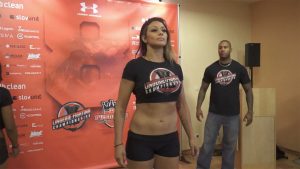 Maxine Frost is not happy about having to oversee the official weigh-in; as Prez of the league, she must step in for a no-show announcer. Violeta Sunic surprises everyone with her height who stands at 6’1″. Her opponent, at least a foot shorter, is Teri London. The room is full of male fighters who are competing at the co-event for Fusion Fights. The combined weigh-in makes a number of athletes uncomfortable.

Hant Arena, with its unique architecture, awaits the LFC teams. The fighters take in the size of the arena, milling about as fight time nears. Interviews are conducted for local television, as we press forward for LFC 24. Leon Hater gives a motivational pep talk that even Andreea Vladoi appreciates. Of course, there is always someone in the LFC who is going to find fault: Lauren Fogle dismisses Leon’s effort. On the other side, Joel Kane barges in on the women as they are still dressing to deliver his speech. How will it go over? 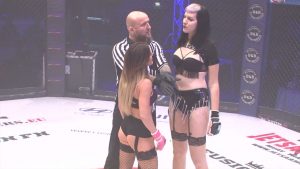 There is a good-sized crowd at Hant Arena for LFC24. The card begins with a visual mismatch between Teri London and Violeta Sunic. The native of Zagreb, Croatia is nearly a foot taller than Teri. Undaunted, Teri dances into the cage with her usual flair. Will Sunic make London’s time in the cage a miserable one, or will we see the shorter fighter literally climb her way to victory?

Cali Cat vs. Jenny Valentine is next, in a contest that includes a fighter once slapped with a lifetime ban from the league. Maxine Frost gives Valentine a reprieve and a chance to make the most of her talent in the octagon. Cali uses her height advantage to keep the hard charging Valentine at a distance; the shorter woman finds a way inside and gets Cali down, transitioning to her own comfort zone, the mat. A contentious fight ends when a lethal kick to the midsection by Cali drops Valentine, leaving her clutching the pain.

Jesse Santos enjoys a height and weight advantage over the very fast Roxy Michaels. ‘El Toro’ benefits from her superior strength and abuses the imbalance in power, but Roxy has the speed to defend against the bullying, countering with well-timed take-downs of her own. After two rounds of exciting action, the never welcomed ‘to be continued’ warning comes on the screen. Tune in to the following episode to see who walks away with a win. 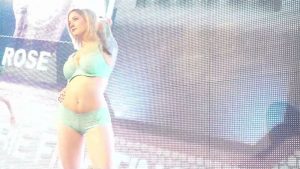 Controversial decisions are unavoidable and opinions trying to make sense of things cannot reverse the outcome. The Jesse Santos [0-0] vs. Roxy Michaels match and result left some baffled and others in agreement. Pay attention to the instructions the fighters receive before the last round. Was that what made the difference?

Maxine Frost steps into the cage against Piper Rose. Maxine, ‘The Prez’ of the LFC, gets accused of having a conflict of interest in continuing to fight. With all the preoccupations that a normal event brings, now add to that the rigors of overseas travel, is Maxine at her best vs Piper? The first round is a struggle for Maxine; she took her opponent lightly and suddenly has to contend with the determination Piper brought. Was Maxine justified in her outburst and was her disqualification warranted? Watch for yourself.

Another first-time in the LFC cage, Croatian, Maya Veljkovic, steps into the cage against Lauren Fogle. Maya was understandably nervous in the dressing room, where a compassionate Piper Rose offered her advice. Lauren brims with confidence as she enters the cage, taking ownership of the bout before the introductions. Maya, who manages to win over some fans, finds herself trapped and has to immediately go into survival mode; Lauren even uses Maya’s own arm to submit her. Did Lauren show good sportsmanship by ending the match in under a minute, instead of prolonging Maya’s humiliation? 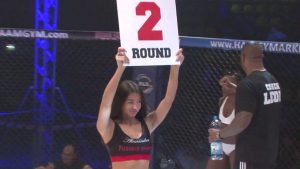 The co-main event is between the evenly matched MaiNe Morgan and Allie Parks. Morgan, who feels passed over for a shot at the European title, just may take some aggression out on Allie; and that is just what she does. When Allie lapses into an inescapable triangle choke, Morgan seizes on the opening.

The bout for the European title is third meeting between Jolene Hexx and Andreea Vladoi. The history that these two share is undeniable in its intensity; they have a genuine dislike of each other and the goal is to punish the other. Vladoi, now on European soil, is bringing the battle to Jolene in the form of creative holds and non-stop combat. A fireman’s carry leaves Jolene unexpectedly vulnerable. We end the episode at the end of round two. To be continued!

Jolene Hexx, fearing she is behind with the judges, invests more energy into the fight and raises her game. Most of the third round belongs to her; yet, the last part of it turns Jolene into a survivalist. Andreea Vladoi applies a couple of fierce leg holds that made the closing moments suspenseful. ‘The Valkyrie’ may just have been saved by the bell.

It takes integrity and a sense of knowing oneself for a person to admit that they expected to lose, but that is precisely what Jolene conveys to us. However, once the winner has her arm raised and wears the belt for the first time, let the partying begin. Andreea’s sour mood, totally understandable, did not dampen the joy of winning the European title for Jolene. Some say that Andreea should be suspended for spitting on a judge and for throwing shoes around, but it’s understandable considering the split decision outcome.

In a show of unity, both teams visit Bratislava Castle before heading back to the United States. Maxine Frost [0-0] has built up so much resentment among some fighters that they blame her for the dreary weather and unpleasant mood. Joel Kane somehow ends up in Vienna, Austria. Join him as he tours the city, looking for more sausage while basking in his solitude.